5 Tips for a Better Jump Shot 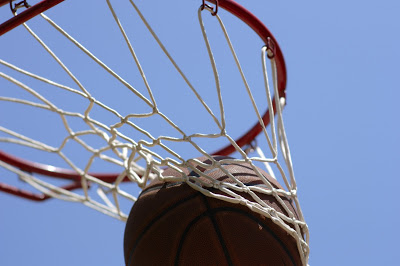 A few
weeks ago, the Golden State Warriors beat the Cleveland Cavaliers to
bring the franchise its first title since 1975. Golden State was
widely considered to be the best team all season long, largely thanks
to a historical shooting performance by point guard and league MVP
Stephen Curry.
There
are many aspects to the game of basketball, but most people will tell
you that the most important one is scoring – after all, the team
with the highest score wins the game.The first step to becoming a
good scorer is becoming a good shooter.
If you
are struggling to hit your jump shot, use these five tips to help you
find your stroke.
Solidify Your Stance
A good
jump shot all starts with your stance. A good should be balanced,
comfortable, and look something like this:
Shot Timing
A sure
way to throw off your jump shot is by trying to hang in the air, or
releasing the ball after you hit the peak of the jump. The ball
should leave your hands while you are still ascending, about one inch
before you hit the top of your jump. This will not only shorten your
release, but also allow you to shoot from further distances because
more power from your legs will transfer to the ball.
Grip the Ball in the Pads
of Your Fingers
For
optimal control and ball rotation, you should grip the ball with the
pads of your fingers; this is the area between the fingertips and the
first knuckle. Firmly gripping the basketball here will leave a small
gap between the ball and the palms of your hand, just big enough to
stick a pencil through, as shown in this image.
Follow Through
You
have probably heard the expression “hand in the cookie jar” when
referring to a jump shot, and for good reason. Properly following
through with the elbow and wrist can maximize ball rotation and fix a
lot of common jump shot errors. During the follow through, your wrist
should be relaxed, with your hand high and pointing at the basket.
Hold this position until the ball reaches the hoop.
Put More Arc in Your Shot
How
important is a good arc? Very! Especially as the game progress and
fatigue kicks in; this is where many players’ shots start to become
flat, forcing the ball to rim out. According to Breakthrough Basketball, a shot with 35° of arc only has a .6-inch margin of
error, whereas a shot with a 45° arc has a margin of error of 3
inches.
Looking
for a place to practice your jump shot? Look no further than Insports
Centers! Located in Trumbull, Connecticut, our 110,000 square foot
facility is home to multiple hardwood courts. With year-round
leagues, tournaments, and open play hours, there is always a way to
take your basketball game to the next level. Visit our website for
more information or join the thousands of others who have connected
with us on Facebook.
sarahkoch@skcreativesolutions.com2015-07-07T17:52:00+00:00
Page load link
Go to Top