Why the Multi-Sport Athlete is Still King 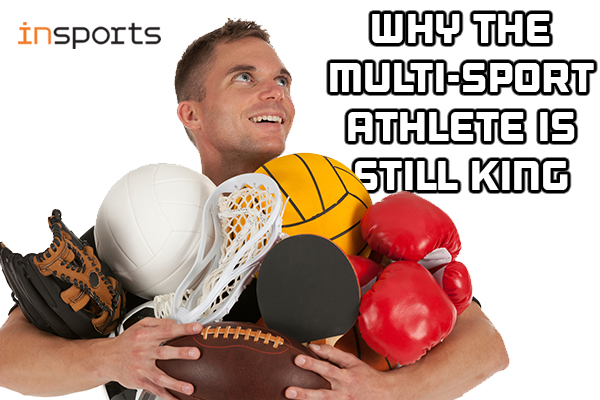 With the amount of offseason training programs, camps, clinics, and leagues, it is becoming increasingly easier for athletes to specialize in one sport – but should they?

The old adage says that practice makes perfect, so wouldn’t it make sense to focus in one sport from a young age, instead of spreading yourself out too thin? In theory, yes, but in practice, maybe not.

Take a look at some of these statistics that show how advantageous it can be to participate in multiple sports:

• Out of 128 NFL quarterbacks that were surveyed, 122 played at least two sports in high school. Nearly 70% played three or more.

• A 2013 American Medical Society for Sports Medicine survey found that 88% of college athletes surveyed participated in more than one sport as a child .

So why does playing more than one sport give athletes such a big advantage over their single-sport counterparts? There’s a few reasons for this:

• Different sports require different movements, which works different muscles in different ways. This helps kids develop all of the muscles in their bodies and become better overall athletes.

• Participating in different sports gives certain muscles in your body time to rest, while you work on developing other ones – preventing overuse. Multi-sport athletes are proven to sustain less injuries and enjoy longer careers.

• Playing different sports keeps you mentally fresh. If you focus on one thing for 365 days of the year, you are far more likely to burn out and give up on your dream.

• College coaches actively recruit multi-sport athletes because it shows a higher level of commitment to the team and willingness to learn new skills.

Connecticut athletes can get their sports fix at Insports. Home to an indoor, full-sized turf field and multiple hardwood courts, our 110,000 square foot facility can accommodate football, baseball, basketball, soccer, and more. Visit our website for a list of upcoming leagues, clinics, and tournaments.